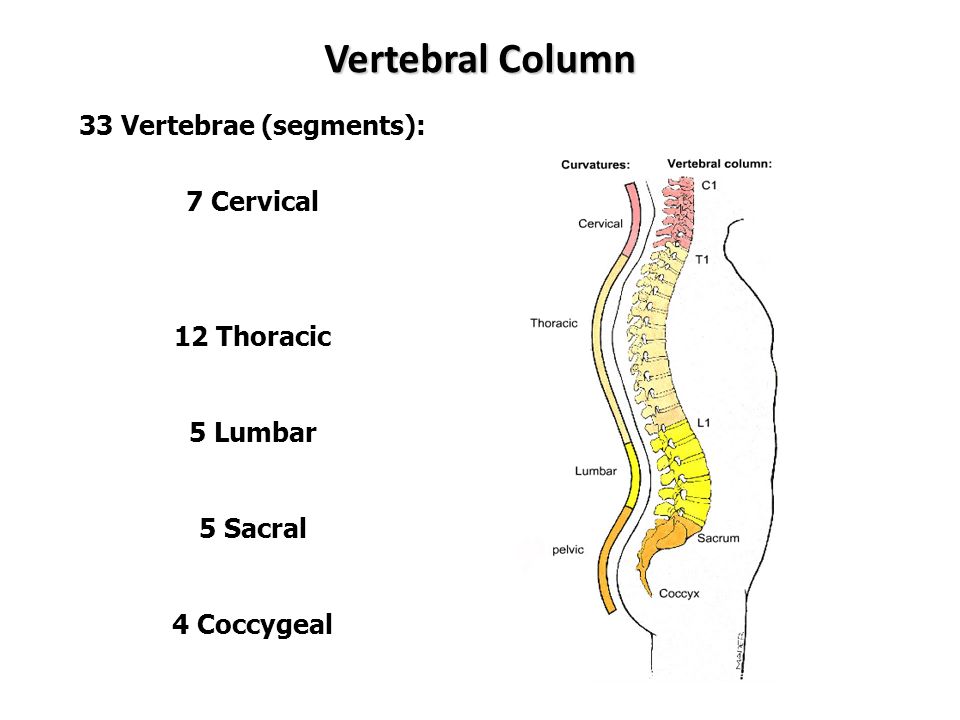 The vertebral column, commonly known as the spine or backbone is one of the most important parts of your body.  It provides the main support, which allows you to sit or stand upright, bend, lean forward, and twist.

33 vertebrae form the spinal column. These individual bones are stacked one on top of the other.  These vertebrae are numbered and are divided into regions called Cervical, Thoracic, Lumbar, Sacral, and Coccygeal.

C1-C7 forms your neck, support your head, allow you to nod and shake your head. T1 to T12 (Thoracic) are the 12 vertebrae that are joined by ribs to form your ribcage. The L1 to L5 (5 Lumbar vertebrae) carry the most upper weight of your body and provide stability when you move. The 5 vertebrae of the Sacrum and 4 of the Coccygeal are fused (also known as the tailbone), which make up the back wall of your pelvis.

Facet joints are part of the connection between bodies of the two adjacent vertebrae. A joint capsule, just like any other joint, surrounds the facet joint. Over time as we age, the facet joints simply degenerate.

Facet joints syndrome occurs because of:

Facet joints can be disturbed with injury. After a trauma, the joint capsule can thicken or can have scarring which might compromise the normal functioning of the joints. Some traumas can be due to a fracture, a dislocation, or any disease that destroys the facet joints like arthritis.

Unexpected or incorrect sudden movement can cause the facet joints to lock.  When the muscles are forced to move quickly or when a movement exceeded the joint’s range of movement, the facet joints can interlock.

As we get older, and because our spine (vertebrae) is almost constantly in motion, the spine simply degenerate. The cushion called the intervertebral discs, between the bones get smaller and smaller and compresses the spine.

Repetitive stresses and strains, as well as over exertion contribute to the thinning of the cartilage lining of the joints, which makes the bone stiff – limiting the movement.

The synovial capsule that encloses the facet joint can get inflamed (swollen) or infected. Thereby, causing pain on the affected area.

The general wear and tear, and the stress on the facet joints increases even more as the intervertebral disc degenerates and becomes thinner. This results in inflammation in the vertebrae and formation of spinal bone spurs leading to arthritis of the facet joint, commonly known as the facet syndrome.

The facet syndrome, also called facet joint pain or facet joint syndrome, is the most common cause of back pain all throughout the world.  It mainly affects the facet joints. These are the small, movable joints on the sides of each vertebra. The facet syndrome occurs predominantly in the topmost portion of the vertebrae called the cervical region, accounting to about 55% of all cases reported, followed by lumbar facet syndromes at 33%.

Facet joint syndrome leads to back pain and stiffness, depending on which joint is affected. Moving of the neck and back can be a difficult. Cervical facet joint pain can be felt at the base of the skull, neck, upper back and shoulders. Lumbar Facet Joint Pain is usually felt over the affected lumbar joints, but may also be felt in the buttocks, groin, hips, and back of the thighs. Severe inflammation in facet joints, as a result of degeneration or prolonged injury in the joint may lead to arthritic overgrowth, with bone spurs blocking the foramina (space through which the nerve roots pass), causing a pinched or compressed nerve.

Other signs and symptoms include:

If you think you maybe experiencing a facet syndrome, contact Pegasus Pain Management. We offer different kinds of treatment options to manage your pain and to prevent further complications of a facet syndrome.